*Be sure to balance amount against soffit intake ventilation 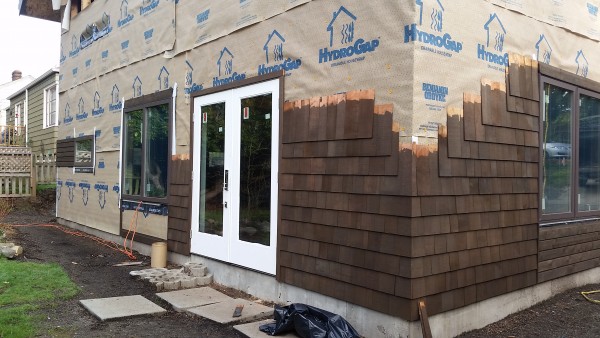 The Seattle construction market has seen unprecedented growth in recent years, significantly increasing jobs and new housing starts. But with less space in the area to build new projects, designers, contractors and builders must be strategic about which projects they take on. Full-scale construction of NetZero homes is an appealing option for many local builders, not only for the chance to work on a sustainable design, but for the ability to set themselves apart in the building community.

Abode Builders, a Seattle-based building company specializing in construction, remodeling, fine carpentry and custom cabinetry, had experience in the green building sector and was looking for a path to enter the new home construction market. In September 2014, an opportunity arose to construct a NetZero home, which the company hoped would segue into similar projects in the future.

A key component of designing and building any NetZero Home is choosing products that will work together to increase energy efficiency and keep costs low. In order to protect the sheathing from moisture without incurring the expense associated with installing furring strips, Abode needed a drainable housewrap. After careful research, Benjamin Obdyke’s HydroGap® drainable housewrap was selected for its ability to eliminate excess moisture and prevent the damaging effects of mold and rot.

“I was leafing through an issue of Fine Homebuilding and saw an advertisement for HydroGap drainable housewrap,” said Allison. “It seemed like a good fit, with a small drainage plane that can sit behind the siding in case there’s any residual moisture. We look hard for materials that will help us work within the budget, and HydroGap met that criteria as well.”

HydroGap drainable housewrap’s durability in the Pacific Northwest winter weather – a period that extends for months – was critical to keeping the project on schedule. As an added bonus, HydroGap also proved flexible enough to be installed in multiple directions underneath the new home’s shingle siding, and did not tear in the region’s violent windstorms. When a more delicate housewrap rips on an unsided house, it often causes a noise disturbance – unpleasant and distracting for those in the building vicinity.

HydroGap also helped Abode eliminate time and expense cutting and trimming furring strips, particularly around windows, doors and other building openings. Rather than make two trips around the house to complete that work, Allison simply nailed the shingles to the house on top of the HydroGap. He said, “Installing furring strips on top of traditional building paper rather than using HydroGap would have cost our team at least a week of labor and approximately a thousand dollars in added costs.”

As the installation progressed, the project drew scores of questions from passers-by and local builders. Allison was spending almost four hours a week explaining the benefits of HydroGap and how he was using it to prevent moisture damage. But, it didn’t take long for the local building community to understand its value, especially in a NetZero home.

The positive response continued as Abode showcased the home at the NW Green Homes Tour in Seattle in April 2015. Attendees received samples of HydroGap and learned how it worked in unison with other products – such as high performance triple-pane vinyl windows and SIPS panels – to create an energy-positive home.